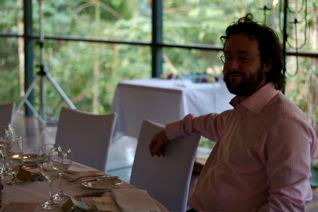 Tim was the best man at my wedding and the most relaxed
There was this guy a knew when I lived in Canberra, called Tim. He was a pretty easy going kind of guy and not much seemed to phase him. When I was affronted by the smallest snub, he would smile and tell me not to take it personally. My rejoinder was often a quick snap back of "it's happening to me so how do I not take it personally?"

Tim and I didn't really understand each other. We were both a friend of a friend and that node was enough to bring us together regularly. In any other situation, Tim would have driven me insane with his overly-relaxed view of all that occurred around him.

One day over many beers, I asked him to explain to me how he saw the world. Why didn't he seem pissed at anything or anyone, ever? Why was stress never knocking at his door yelling "Police, we have a battering ram!"

He told me in a very matter-of-fact way that was because he was the star of the Tim show. On the Tim show everything was about him. When people interacted with him, they came on to the Tim show to do a cameo. When the characters told him something, he took it at face value. If he went for a job and they said he was over-qualified then he simply took that as fact. When someone rocked the boat in the Tim show, it didn't sink. That was because any negative stuff was more learning of morals on the Tim show.

The way he saw it, each other person in the world has their own show that they star in. Sometimes there are spin-offs and guest appearances. They didn't always remember that other people were on their shows because it was all about them. If a decision seemed mean or affected Tim badly, that was either because they had a lesson for him or they were too consumed in their own show to realise the consequences. People were not bad. They were just thoughtless at times.

I have passed on this tale of the Tim show to many people in my time, when they needed to know that it is all about you, except when it is all about someone else. The world isn't made up of good and bad; right or wrong; or even black and white. It's just a bunch of sometimes mismatched TV shows with egocentric stars who are teaching and learning from each others lessons.

If you have a day when you feel a little or a lot stressed by those around you. Treat it like the Tim show or the Damana show. Don't stress too much. Tomorrow's episode is going to be better.
Posted by Damana Madden at 23:27

I'm just hoping my season finale will be spectacular!