There are some amazing women out there and I'm not talking about celebs and unattainables. The most interesting and inspiring women I've found are ones that actually exist in the world around me. Having asked one of the strongest women I know to write a few words about how she became who she is, I'm happy to say that it is here for you to know too.

Megan and I met on twitter, via a shared love of shoes. We aren't shoe addicts but see ourselves as collectors. She is a lawyer by day and mum, shoe lover, wife, writer and trend setter every other moment.

Hopefully, you will gain as much from learning about where others find their strength as I have.


“What does my name mean?” I remember asking my mother frequently. “It’s Welsh” she would say “It means the Strong One because that is what you are – strong.”.

If someone tells you that you are strong, does that make you become strong? Strong willed, strong minded, strong opinioned – independent. Or is the name a talisman to protect that strength?

My grandmothers, both of them, were strong women. By some strange stroke of fate, both were named Helen. The name Helen originates from the Greek and means (apparently) ‘the bright one’. Both were possessed of incisive minds and biting wits.

My Scottish gran, wee Nellie, the youngest of 13 children, won a scholarship to St Margarets Convent. Her parents decided that going on to high school would just lead to problems. Aged 14 my gran was apprenticed to the J & P Coats Mills in Paisley. She always claimed that her parents had made the right decision but there was a simmering anger within her that evinced otherwise. 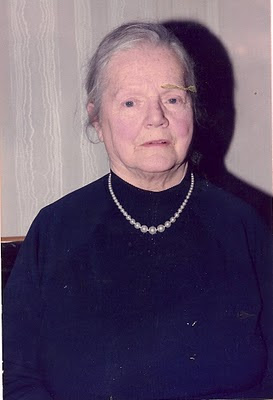 It was this anger, this ferocity that always impressed and terrified me about her. On one hand she was verbally though not physically affectionate. Every week she and I would hang out and I would polish and pootle about with her collections of brass miniatures and antique buttons and talk. Then we would walk. “Let’s click hen” she would say to me linking arms with me in a conspiratorial way when I tried to hold her hand. At some point my gran would meet someone, some elderly woman that she knew from the church. At that point she would relinquish my arm and stare the other woman straight in the eye. A conversation that appeared cordial would then ensue. After what seemed an eternity to me (probably 5 minutes), the conversation would draw to a close and the parties would disengage. “See you hen” my gran would smile and wave. “That one” she would then mutter to me “I would piss on that one if she was on fire, she’s a spark out of hell that one”.

The childhood me often wondered why Gran spoke to people she disliked so intensely. Later I realised, like a Mafioso she would keep her friends close and her enemies closer. Her single most important piece of advice to me was – “tell no one anything hen, you only empty your mouth to fill someone else’s”. To this day, I follow her advice. Anything that you tell me in confidence will stay in my confidence. Completely, absolutely and irrevocably.

There was another ferocious grandmother Helen in my life, the chain smoking, languid, elegant one. The one who wore beautiful clothes and shoes, who was never seen without a shampoo and set or a manicure or a full face of make up.

“tell no one anything hen, you only empty your mouth to fill someone else’s”

Grandma Helen and I were never going to see eye to eye. Her concept of good grandchildren were children who sat quietly and ate instead of talking. “What wonderful appetites your children have!” she would exclaim to my mother. This was all very well until I became a teenager when she would remind me frequently not to eat too much. There was an odd tension in my grandma Helen’s eating habits. On the one hand she would drink Tab diet coke

and on the other hand, she could and would happily eat her way through a retail display tray of Cadburys® Crème Eggs at a single sitting. While chain smoking and drinking diet coke.

And yet despite her girth and the fact that her breasts rested on her knees without a bra, my grandma Helen carried herself, all 5 foot 2 inches of her, with elegance and grace and an innate sense of her femininity. “I may be fat” she would say “but I have amazing legs” and she did.
From her I learned that there is no situation for which a good outfit, a decent hairstyle and a healthy dose of self belief can’t prepare you.

"...there is no situation for which a good outfit, a decent hairstyle and a healthy dose of self belief can’t prepare you"

From each of these women I have acquired a gift – my fierce protectiveness of my friends and family from Gran, my appreciation of nice clothes, scents and shoes from my grandmother and my belief in the overwhelming power of love from my mother.

Mental, like physical strength, something that we are either born with or something we can acquire by through persistence and hard work. When I look at my strong willed, independent, ferocious little daughter I realise that her battles won’t be so different from mine, from every other woman out there. And I hope, and I pray that it won’t take her 40 plus years to figure out how to fight those battles effectively. Like me.
Posted by Damana Madden at 13:30

Agreed. Amazing.
This is such a great post. All I can say is wow, and I think I need my mascara is a little smudged.

Wow. That is *exactly* what i needed this afternoon. Thank you so much xox

Isn't it amazing how much of an imprint others can leave?

Thanks for sharing this Megan - and thanks to your three amazing relatives for helping to shape you into the beautiful person you are.

I am the same type of "friend" i.e. if you tell me something in confidence, that's it. It goes in the vault - (a little Seinfeld reference). :)

But seriously, I am a very good listener and hence my friends tend to share very personal information with me...that I would never for a moment consider sharing with anyone, ever. I can't imagine being any other way.

Also, I love the attitude: a great outfit, hairstyle, or playing with new make-up can certainly give a boost. As can shoe shopping!

I take after my paternal grandmother who, with her two sisters, actually starred in Vaudeville in a show they called "Doll Frolics." They danced, sang, and played musical instruments. They were amazingly talented and very strong women. My grandmother and one of her sisters gave up performing to marry and have families. My grandmother's twin sister (who lived with my grandmother virtually all of her life) never married but ran a dance studio in Coral Gables, FL for decades. She taught hundreds, if not thousands of students (including me!)

While in Vaudeville they traveled the country by train, performing in dozens of cities. I have a scrapbook with newspaper clippings of all the cities around the country that they performed in. It is awesome!

Sitting around listening to my grandmother and my great-aunt talk about (and argue over!) their experiences was one of the highlights of my childhood. They were a treasure!

What a lovely story!

Names have a huge influence on what people become. Did you know that the number of dentists called Dennis is disproportionately huge?