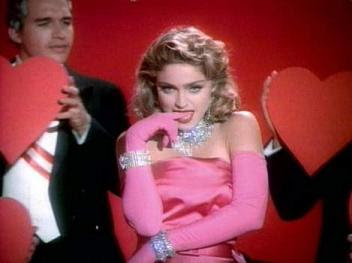 There used to be this TV show on in the 80s, starring a young Alyssa Milano. She was the daughter of a man who basically worked as a maid for a rich upper class American woman. I don't quite remember why it was called that but I think it had something to do with the confusing idea that a man was in a female job working for a boss who was a woman.

[Quick addition: I'm not saying anyone is the automatic boss or there is a boss at all. I'm talking about how times have changed from even the 80s.]

I recently heard someone complaining about the idea of the show and saying that the question and name of the show didn't make any sense. That the woman who paid the man maid was the boss because she paid his salary. That sounds obvious now, as we sit here in late 2010 wondering how late we can leave it to buy all our Christmas presents.

I nodded and said "hey yeah, she was the boss and why did they even ask that?" then remembered that there were very strict gender roles at play in the past. Even in the 80s with Madonna calling it a Material World and women walking around in shoulder pads didn't really mean that much was different in the world.

Sure the sixties changed things. Women burned their bras and took the contraceptive pill on the way to liberating themselves. The world did change. No disputing that.

The strange thing is that I keep thinking it changed in the sixties and that we are sitting pretty now because of that. That nothing happened in between. Of course, that is ridiculous.

I remember TV shows that were dominated by kickass women "like Joan Collins in Dynasty, Victoria Principal in Dallas" as @maverickwoman on Twitter reminds me. There were movies with amazing female characters who had strength and independence. They went after their dreams and those dreams were not always the 50's view of a white picket fence and a yard full of kids.

That is what I grew up with. Not the sixties view of things but the 80s view of the world. A world with great possibility. Women were as strong, greedy and flawed as men. We can't stand around and talk of equality and forget what that means. Equal in all ways means good and bad. I saw that. It impressed me. It empowered me.

Why am I talking about this? Someone said that the sixties changed it all for them. Of course it did. It was the rolling start to the snowball that became the avalanche of feminism. BUT for me it was the 80s and it's awesome women who inspired me.

I hope the young women growing up now have that too. In fact, I look around and know they will be stronger and more blasé about the way it eventuated. That is fantastic. It is awesome. It gives me hope and a lot of it.

I hope Madmen doesn't send our sons and daughters back to those terrible sixties! Give me bad ass Joan Collins and Victoria Principal any day over Betty Draper...Puhleeeze!