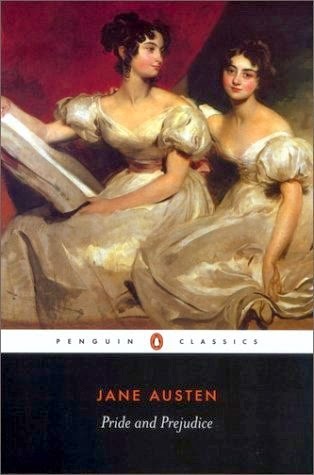 My 9th book of 2014 is one of my old favourites, Jane Austen's Pride and Prejudice.

I have read this book more times than can remember. My estimate would be about two dozen full reads and a few more skims through.

It is a book I pick to remind myself of a world where women were disempowered and found ways to be themselves and buck gently against the system.

People think it is all about love but it isn't. Love is not the point. It is about two people finding respect for each other. Without it, love means nothing. Mr and Mrs Bennet are an example of not having that respect. Lizzy's father talks about marrying a woman he does not respect and living with himself for the rest of his life knowing that. He hopes his daughters don't get the same deal when they marry.

A friend asked me yesterday why I have read this book over and over again. I thought for a while and supposed it was a cool love story or strong women or the restrained drama... but, no. I read this over and over because of the words. It is so well written. The banter is brilliant and quick. The book itself is more than just the story and how it is told but is also the words used and how they are placed. Having read everything Austen wrote, I can say this is consistent but none as good as this classic.

Should I read this? Over and over again. Whether you are male or female, this book is one you should read. At least one Jane Austen book should be on your list of classics read.
What did I learn? I still love this book 23 years after first reading it.
Posted by Damana Madden at 15:03