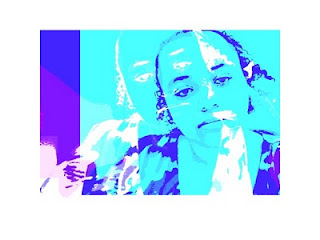 There is a guy that I broke up with. Let's from this point forth refer to him as Mr X. He and I have shared friends. We have stayed friends and hung out over the last few weeks.

Last night, he invited me out with our mutual friends. Told me where we were meeting and when. I was happy to go since I'd been working hard for the money, all week and wanted to get some time with my besties.

I got ready and grabbed a cab in to the city. Arrived exactly on time, as promised. No one was there yet so I grabbed a Bellini and a comfy couch, to pass the time. The party arrived one hour and 15 minutes after I got there. In that time, I'd slowly sipped my drink and read the text messages promising they were on their way "right now".

When my friends walked in, I only recognised two of them. Mr X and another woman who he hangs out with a lot. She's a bit of a groupy of his and has been a little aggressive towards me in the past. With them was another rough looking woman with tattoos. I did noticed all her tattoos were spelt correctly if that counts for much.

To say I was shocked is an understatement. I played it cool and tried to work out how I was meant to react to the situation. I grabbed a drink and agreed to sit and chat with them. After all, I'd just taken a $40 taxi ride to be there and was in a happy mood, despite the confusion clouding my head.

They then proceeded to tell me that he was a player and that I had been played. That he never wanted to see me anyway and I hadn't dumped him since he never liked me. It felt very high school. The three of them admitted to "being together" and I didn't bother to ask them to elaborate. They are a rough bunch while sober and they were doing shots by now. I was holding on to my second Bellini and still wondering how I should react. It was a bit like facing a lion who is mauling a friend. You want to save your friend but you don't want to get mauled. Unfortunately, this analogy sux since I was the friend being mauled and the friend watching. [Work with me here, guys]

After they started laughing at me and calling me naive and gullible, I drank the rest of my drink and excused myself. I got straight in to a taxi and headed home.

I was still in shock when the text messages started flooding my phone. They were ridiculing me and attacking me like a bunch of snapping hyenas. He had shared my number with them so they could hurl abuse at me in a howling unison.

As I emerged from the mental haze, I realised I was upset. I felt foolish and afraid and isolated and sad. That made me angry. I retaliated and said some mean stuff then realised that they are the type of people to walk up and glass me, to express displeasure at my excessive use of the word "bogan".

I turned my phone down. Once I stopped reacting, they stopped attacking. I got home, said hi to my Mum and headed straight to bed. I lay awake in silence - still shocked - from when I got home at 10:30pm to 2:30am, when the phone started ringing. It was Mr X. I didn't answer. Then the voicemail messages started coming. I listened to them. They called me pathetic and a loser. I was upset. I didn't understand. It felt like being bombarded with small pellets. Each did no real damage but in total, the bruises were forming. I turned the phone off.

This morning, I changed my number. This time, I'll guard that number. Next time, there will be no next time.

Interesting thing is that I stopped being upset once the phone was off. I couldn't sleep. In fact, I didn't sleep all night. Tried but no go. Got maybe 15 minutes this morning. It's been more than a day since I slept properly.

I know this feeling. This lack of all feeling. That numbness that comes when my brain turns off the feelings. When the sleep won't come, no matter how long I wait. I'm aware of what is happening to me. It's a slip back in to that depression. Luckily, I'm in a good place and know how to deal with this. Let it run its course. Let the moments pass in a safe place - at home and at work. Let the emptiness fill again with normal feelings. Let people I know and trust know that I need someone to look out for me at the moment. Let the rain come down.

It seems I'm dealing extraordinarily well with the situation. In the past, this would have devastated me. People I've spoken to this morning have said they might not cope so well. Me... I'm doing ok. It's a bump in the road. It's a blip on a radar. It's a learning experience from hell. It's all going to be ok.

Depression does not own me anymore. In fact, no one does. Not Mr X and his harem of banshee bogan skanks. Not the cloud that once engulfed me and made the air so hard to breathe. Nothing. Nil. Nada. Nuts.

Yes, it was cruel what they did. The world has some really nasty people in it. I am naive and a little too trusting at times. I'm learning though.
Posted by Damana Madden at 14:47

I'm so sorry this happened to you and they tried to invade your life. Someone once told me that the world is an open-air asylum, and it's sounds like you've just run across three of the nastiest 'inmates'. Well done for standing up to them and don't let them or the depression win!

W T F
Behaviour like this makes me wonder how the hell these people's brains function.
>[

Can't read this without crying.
Mana, you are a lovely beautiful friend and I'm so sorry I wasn't awake to reply your massages back. (I've been taking pills to sleep, natural ones, but very strong).

I can't understand why there are so many mean people in the world and I hope you don't cross with them ever again!

What the....? What are these people and how the hell do they get off on treating someone like that?

Particularly someone who strikes me as thoughtful, kind and engaging as you come over to be.

Thank God you're shut of them. They sounds like horrible excuses for humans.

Wow, they sound like high school bullies, what idiots! They obviously have an inferiority complex.

Hope there is someone you can see about the depression? Exercise worked for me but that would be hard with the foot...xxoo

@shimmergirl, I love that - an open-air asylum. Will have to use that in the future.

@dekrazee1, there is probably no brain involved.

@bemaia, don't cry for me Argentina. I'm doing a-ok. I know you are always there.

@Victoria, I will continue to be who I am. Hopefully, that means I'll never be as jaded and mean.

@Jen, the depression thing has been a long journey that I've pretty much emerged from. I slept well last night and it seems their affect of me was fleeting.