Must I be dead?

Today has been lovely relaxed Saturday. My Mum and I hung out together and did our own thing. Siena the kitty and I, had a nice afternoon nap in the aircon while the humidity of Darwin belts those poor souls outside around. After a quick trip to the shop, I scored peaches and an affordable sparkling white with the soul intent of making Bellinis. They are currently my favourite drink, since I can sip on them and not really be drinking much. Sweet and fruity - perfect for the hot tropics.

I decided to make some meatballs for dinner, when the sun set at just after 7pm-ish. While packing the dishwasher and cleaning the kitchen, I came across a white envelope with my name on it. My name had been spelt "Demana" and my address was scribbled on it in big round writing. I opened it, thinking it was something a friend had dropped off in my mailbox. There wasn't a stamp.

In it was a plain white card containing a threat. 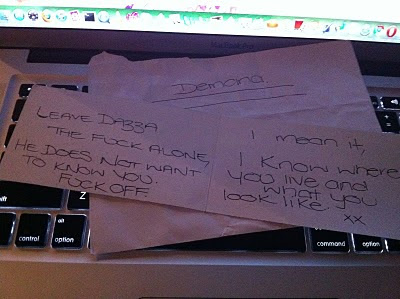 I did what I was advised and called the police. I reported it and was advised to go in and talk to someone on Monday. It is quite terrifying but my mother is super strong and never gets shaken by anything.

The first police call-centre person that I spoke to was quite helpful. The second guy said to me that there was little that could be done and the police can't get involved unless I'm actually hurt. He said "threats happen all the time". I actually did ask him if I must be physically hurt before anyone cares. He said that is when the police can do something.

This is not the world I live in. I'm not used to threats and people knowing where I live. It's scary. To be told that nothing I'm feeling is valid until something terrible happens to me, makes me feel even worse.

I probably did the wrong thing but I called my ex and asked if him and his girlfriends could please stop harassing me. I wanted to try to reason with him before bringing in the cops. He laughed at me and said that he can't stop people from threatening me. He's not the police. This isn't his problem.

Knowing where I stand is good. I'm not going to retaliate. I'm going to keep collecting evidence and go to the police. I will not be waiting until someone physically harms me or kills me before getting help.

The police can expect a visit from me.
Posted by Damana Madden at 21:35

Email ThisBlogThis!Share to TwitterShare to FacebookShare to Pinterest
Labels: 2011, People

Jeez. Keep tweeting regularly so the rest of us know you're okay...Hope it gets sorted out quick smart...