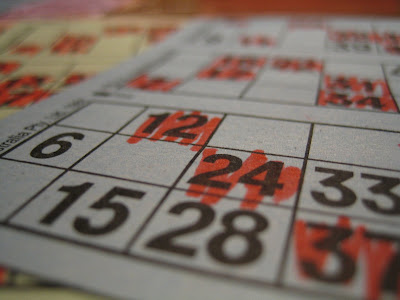 A couple of weeks ago, I ended up spending a fun Friday evening hanging out with friends and playing Bogan Bingo. No, that's not a judgement. That was the name they called it.

The two hosts had beer guts and mullets (fake apparently) and played bad 80's music while making crass jokes. The food was awful and the table next to us was very drunk but despite this, it was a fun-filled night :) Kelly won a meat tray and we played about 50 games between the 4 of us over 2 hours.

It was enjoyable so I do recommend doing it once but never again for me. Deepest apologies to our Iranian friend who smiled and took it in her stride. Too bad we couldn't tell her that anywhere else in Australia, that would just be normal :)
Posted by Damana Madden at 16:07