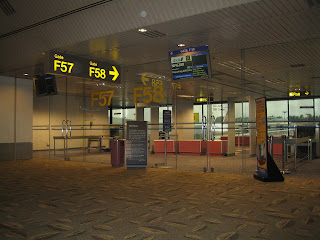 For an Immersion/Cultural-Reorientation for my company, I left Sydney on my Bollywood adventure. A car picked me up at 8:30am Friday morning and took me to Sydney's international airport. It only took 45 mins from home to the point where I was through customs. That was much faster than I expected.
Singapore Airlines are good on space and food but I don't see the big deal with their service. Maybe all flight attendants hate me because the service doesn't ever impress me.

It took 8 and a bit hours to get to Singapore and the whole time was spent with the American version of Kenny the toilet guy. This guy was Rudy, who was an engineer specialising in plane toilets. He was in Sydney for the A380 landing there. His job was to give support if it was needed. I didn't go digging for details. He talked a lot. Mostly about himself. He used the most amazingly stupid pickup lines on the flight attendants. It actually worked too. He was telling a nun who was getting off the plane with us that he had to stay back to make plans with one of the "lovely ladies". Lucky me.

Singapore airport was clean, warm and like a racetrack with all the speeding golf buggies that the zoom around carrying staff. Apparently there is a spa so I'm heading there on the trip back.
Posted by Damana Madden at 22:00